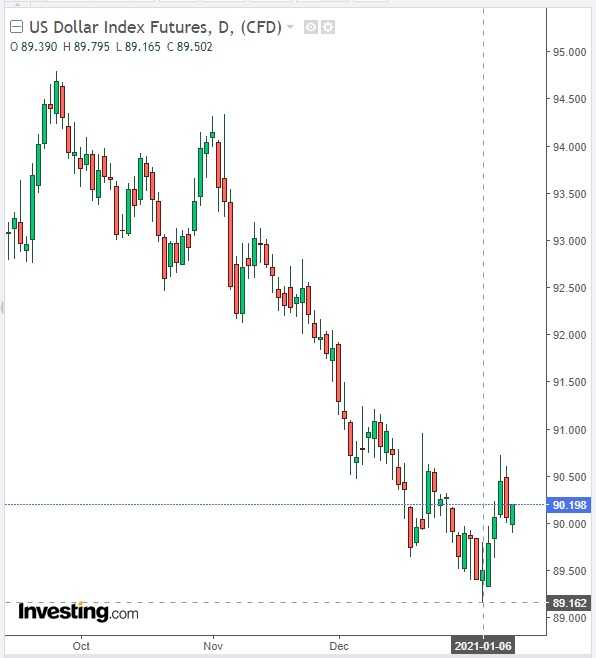 The dollar is strengthening, and the EUR / USD pair moved to decline again at the beginning of today's European session.

The weakening of the euro accelerated after the start (at 09:00 GMT) of the speech of the head of the ECB Christine Lagarde. Investors ignored the rather positive speech of Lagarde, who said that the year began "in a more positive way than some suggest," and if "the PEPP package is not needed, we (at the ECB) will not spend it".

The euro is weakening, and the EUR / USD pair is declining, ignoring also a rather positive report by Eurostat, published at 10:00 (GMT), according to which the volume of industrial production in the Eurozone increased in November by 2.5% (against the forecast of +0.2% and +2.3% in October). On an annualized basis, industrial production in November fell by -0.6%, which is significantly better than the forecast of -3.3%.

Now, market participants will be watching the speeches (at 18:00 and 20:00 GMT) of the FOMC Fed representatives.

While the central bank has already stated that the interest rate will remain at current levels for several years, given the daunting task of building up weak inflationary pressures, lately there have been more and more ideas among investors about the possibility of a reversal of the dollar bearish trend, as signaled by the growing since August 2020 the yield on US 10-year government bonds.

As part of the stimulus program, the Fed is now buying Treasury and mortgage bonds for $ 120 billion a month. As follows from the minutes of the FRS meeting held on December 15-16, published last week, the leaders of the central bank do not consider it expedient to increase the volume of purchases or change their structure.

The euro also falls on Wednesday amid risk of collapse of the ruling coalition in Italy, and the dollar is strengthening, given the political uncertainty following the attack on the Capitol last week and the impeachment threat of incumbent President Donald Trump, and amid growing fears over the coronavirus and the continuing rise in the number of cases of Covid-19 in the US. The dollar index has stopped falling so far, and, having stabilized near the 90.00 mark, is growing again today. At the start of today's European session, DXY dollar index futures are traded near 90.20 mark, 104 points above the local nearly 3-year low reached in early 2021 near 89.16 mark.

Market participants will also pay attention today to the publication (at 13:30 GMT) of US consumer price indexes for December. The Consumer Price Index (CPI) is a key indicator for assessing inflation and changes in purchasing habits. A high score usually strengthens the US dollar, while a low score weakens it. Forecast for December (for the core CPI index): +0.1% and +1.6% (in annual terms), which indicates some improvement in the situation after the index fell in March and April. If the data for December turns out to be weaker than the forecast, then the dollar is likely to respond with a short-term decline. The data better than the forecast will strengthen the dollar, including in the EUR / USD pair, which is traded near the 1.2180 mark at the time of publication of this article, maintaining generally positive dynamics (see Technical Analysis and Trading Recommendations).