GBP/USD: is the likelihood of negative UK interest rates high? 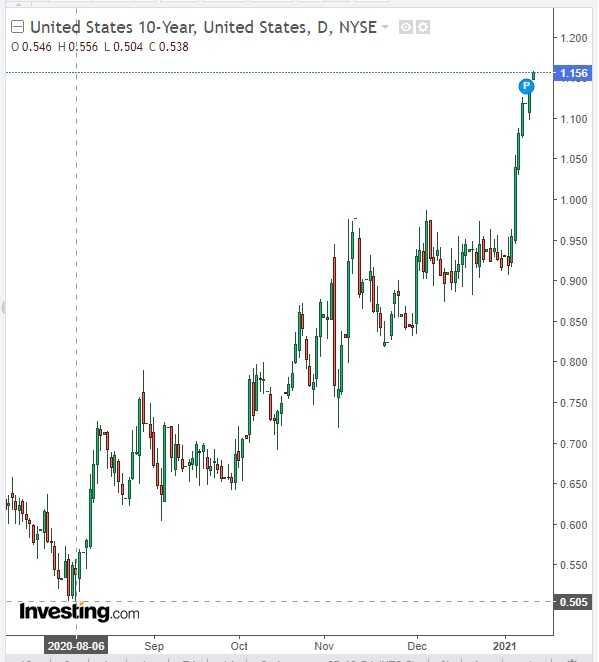 Despite the unrest in the United States, the threat of a second impeachment of US President Donald Trump and the possibility of problems during the transition of power, investors continue to buy risky and high-yielding assets of the American stock market. At the same time, market participants sell defensive assets, including gold and government bonds, investing in American stocks. Thus, the yield on 10-year Treasury bonds at the time of publication of the article is 1.156% (on Monday it was 1.131%), continuing to grow, which is a sign of their sales and falling prices.

And while the dollar's gain has stalled after a strong rise on Monday, some observers and economists are inclined to believe that the US currency may soon gain momentum, as the yield on US government bonds rises on expectations of additional fiscal stimulus under new President Joe Biden, which could limit the US Federal Reserve's propensity to soften policy. Thus, the President of the Atlanta Fed Rafael Bostic on Monday said about the possibility of starting soon the curtailment of bond purchases by the central bank.

Meanwhile, the greenback was slightly lower on Tuesday, although the DXY dollar index held steady near a 3-week high, currently close to 90.40.

Of the major currencies that compete with the dollar, the pound strengthened the most during today's Asian session and at the beginning of the European session. In part, this can be attributed to the fall in the British stock market. Thus, the FTSE 100 index of the London Stock Exchange lost 0.15% in the morning, dropping to 6775.00, which is 2.6% below the local 11-month maximum reached last week near 6953.0 mark.

At the time of this article's publication, the GBP / USD pair is traded near 1.3580 mark, 70 pips above today's opening price. Investors are worried about the tightening of quarantine restrictions in the UK, withdrawing funds to the cash.

And yet, one should not expect a more significant strengthening of the pound and the growth of the GBP / USD pair. Many economists expect that the Bank of England will soon push interest rates into negative territory amid deteriorating economic outlook due to the pandemic and new restrictive measures taken by the authorities in the form of a hard lockdown. For example, one of the leaders of the Bank of England recently announced that the study of the issue of negative rates is scheduled for February, and Governor of the Bank of England Andrew Bailey repeated on Monday that "negative rates remain one of the tools". Bailey said today that although “negative interest rates are a controversial issue that raises many questions”, “the Central Bank is doing a great job of studying the practical value of negative rates”, and “there are good reasons to believe that we live in a world of low rates, which will stay low for a long time".

Earlier on Monday, Bank of England spokesman Tenreiro said that “additional stimulus may be needed. In this case, it will be important to have negative rates in the toolbox”.

Given the rise in Covid-19 infections and the introduction of quarantines, economists at the Bank of England have lowered their forecast for UK GDP in 2021 to 3.1% from 4.7%. According to their new forecast, the UK economy will recover to pre-crisis levels in 2024, two quarters later than previously expected.

According to Tenreiro, "soft monetary policy can help the economy recover faster", and "the experience of other countries indicates the effectiveness of negative rates".

Market participants are also increasingly negative about the prospects for trade relations between the UK and the EU, despite the fact that the parties did manage to conclude a trade agreement at the end of last year.

No important macro statistics are expected to be released today. However, it is worth paying attention to the speeches (at 14:35 and 19:00 GMT) of representatives of the FRS leadership. It will be interesting to know their views on the prospects for the Fed's monetary policy.